Probably the biggest problem anyone has with keeping a livestock Guardian dog with stock is getting the young dog livestock safe and through the puppy stuff successfully.

Most young dogs, being dogs and being puppies are going to go through a stage or two where they will try and play with the stock as they would with another dog. This is especially so with dogs who are well bonded with their stock. They don’t mean to harm the stock, but sheep, goats or poultry don’t tolerate chasing and mouth wrestling and so we must prevent these behaviors from happening. It’s important to keep a careful look out for any signs that the stock is being played with and then immediately do something to remedy the problem.

A puppy with good guardian dog instincts will be protective and maternal, but it will still 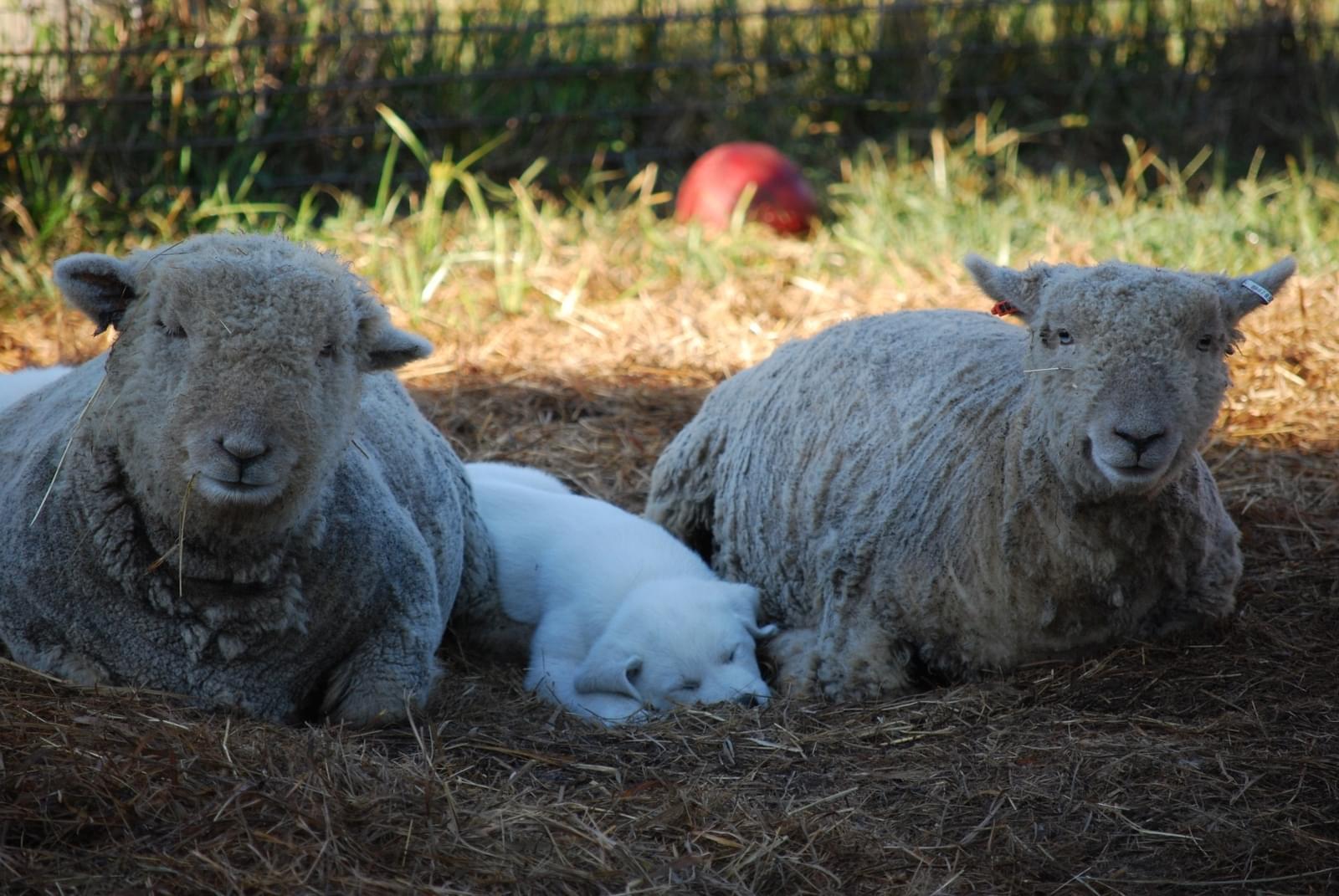 require instruction from you on correct and incorrect behaviors towards people and livestock. Unless the puppy knows it should not play chase , mouth wrestle, or pull ears or wool it doesn’t know these behaviors are wrong, so it is critical that the puppy be well supervised through that first year so that he learns appropriate behaviors.

Its much easier, more efficient and more effective to develop good behaviors right from the start then to spend months or even years trying to break bad habits once they develop.

I suggest that when people first get their puppy that they start out with the puppy in a fenced area right next to the stock so that it can start forming social bonds, but safely confined so that they do not develop improper behaviors. I recommend that the puppy be allowed in with the livestock on a regular basis but only under supervision for at least the first 6 months and to a year in some cases depending on how much time you spend working with the dog and how well that you make well timed praises and corrections, and supervise them carefully throughout the first couple of birthing periods. This way you can make corrections right away for any sign of mouthing or play chasing and not let any bad habits develop.

It is also much easier to make a well timed correction when that pup is small, slow, and under foot, then if you wait until the dog is older & have to try catching up to a large and faster dog, play chasing way out in a pasture, so again it makes sense to start developing good behavior right from the start.

The biggest advantage to developing good habits right from the start is that the dog will be livestock safe usually by 10 months of age. If you can make a good correction the first time and consistently every time that puppy tries to chase or mouth a sheep, you will be off to a very good start of developing a safe and reliable livestock guardian dog at a relatively young age.

If however you allow bad habits to develop then you may have to spend a lot of time over the next couple years trying to break those bad habits. It may take 2-3 years to make that dog livestock safe and if you aren’t willing to put the effort into restructuring the dog’s behavior, the dog may never be dependable. So it makes sense to take the time initially and get that pup off to a good start.

For the person who puts that puppy right in with stock and who didn’t supervise it well ,and now suddenly are finding wool pulls, sheep with lacerations or play killed lambs, you can still salvage this dog but you now have to be spend a good 6-8 weeks consistently supervising the dog and reshaping its behavior.

For the dog to understand the cause and effect of a correction it must be delivered while the dog is in the actual act. By the time you see the dog chasing stock and in the time it takes for you to run to the dog out in a pasture to make a correction, the dog has seen you and stopped the behavior way before you can get there to deliver the effective correction. Likewise I think if you yell at the dog and the dog knows the command no, it may stop the behavior but I believe in most cases a distance correction of a NO command may distract the dog and stop the behavior at that moment but it really hasn’t learned that chasing is not acceptable. By the time a livestock guard dog is 6 months or older the only really effective correction that can be given in a timely manner at a distance is by an electronic collar. A well timed correction is the most important criteria in the dog understanding the correction so the dog must be in the act of chase or mouthing and an electronic collar correction is the only way to be there in a timely manner. Usually one well timed correction is all it takes for the dog to understand that it can’t play chase or mouth. Never use an electronic collar if you can’t catch the dog in the act or to take out your frustrations out on the dog. A poorly timed correction does more harm than good.

Even with good early supervision many pups when they reach that 7-10 month adolescent age will test the system and do some play chasing. So this is another time to keep a good eye on the dog’s behavior.

After studying many, many Akbash Dogs with their sheep over the past 14 years, I have made some observations of the interspecies behavior. The following dialog is simply my opinion based on my observations in reference to what knowledge I have of canine behavior.

It is not meant to be a scientific study but merely food for thought and perhaps an aid for novice Livestock dog owners to enable them to understand some of the behaviors of their guardian dogs.

I think that there are two kinds of personalities of Livestock Guardian dogs; there are those dogs that truly identify with, stick close to, and seem to like their sheep. Then there are those who distance themselves from the stock a little, who tolerate sheep but aren’t right in the middle of the flock nurturing & mothering them, but who never the less protect them because they are in with them and are part of the "family". Both are equally effective as livestock protection dogs.

I think, in some ways that their play behaviors with the stock can help us identify and understand their relationship with their stock. So what do we look for?

Most young dogs will exhibit some inappropriate play chase types of behaviors towards their livestock. One of the most common behaviors are play chasing and pulling out tuffs of wool. When two dogs play you will see them play biting each others scruffs or backs, or rear legs. I think in many cases this is that same behavior that two dogs would share in play but, with out another dog to play with they direct it to their pals, the sheep or alpaca.

When at play the lambs and the dog run shoulder to shoulder, the dog reaches over to mouth wrestle as it would with another dog and gets a mouthful of wool. This behavior is the least harmful to the sheep of the play behaviors, but it still needs to be discouraged. It can escalate to other more dangerous behaviors. You can tell this is occurring when you see sheep with finger sized tuffs of wool sticking out on the sheep’s backs, or tuffs of wool spread out on the ground.

Another play behavior is when the dog chases the sheep and grabs the sheep by the back leg to stop and hold them. Often you will notice parallel scrape lines on the inside of a lamb’s leg where there isn’t much wool. So again if you see funny scrape marks on the legs the pups is doing some rough play.

A third play behavior is when the dog chases gets the lamb down and basically slobbers on it. This might be similar to what two dog would do mouth wrestling. The lamb is not usually injured but is very stressed by the mouthing. I believe that pups that do the above behaviors are well bonded to their sheep and are trying to play with them as they would another dog.

The more serious behavior is when the dog picks up a smallish sized lamb and shakes it, often killing it. This may be done in play, everyone has seen a dog shake its toy at one time or another but in my opinion this is more of a predatory behavior, and though it might be a play behavior to the pup it has predatory signs. I have found that the dogs who do this behavior are generally the ones that aren’t terribly empathetic to the livestock. These dogs if successfully supervised and trained, protect simply because they are in with sheep and not the dogs who really seem to love their sheep.

Some puppies with only play intentions will give chase and sometimes flighty sheep will crash into fences and break their necks and die.Often if a lamb dies, either by natural causes or if it is killed by the dog, the dog may try to eat it. I believe this is partially an instinct on the dog’s part to eliminate anything that might cause other predators to come around. I don’t think it usually means the dog has developed a taste for lamb, but the dog must be strictly supervised and corrected for any further potentially damaging behaviors towards the stock. A dog that does any of the above behaviors can be salvaged if the behaviors are recognized early and the shepherd is willing to put some time into supervision and restructuring the dog’s behavior.

How do we make a correction? With a puppy a swift jerk on the scruff and a deep "No" followed by an immediate release. The entire correction take less than 3 seconds. With an older dog, in order to get a well time correction you probably have to use an electronic training collar. Your correction must be made while the dog is in the act. By this I mean actively pursuing, play bowing, or mouthing. A correction five seconds after the dog stops the behavior be it distracted by your pursuit or whatever, will not make sense to the dog and it will not associate the correction with the deed.

As I have preached before, it is of incredible value for you to buy your pup from and experienced and responsible breeder who will be willing to keep in touch with you and share their dog raising experience with you. The livestock Guardian dog is different from most breeds and I believe that most people need the breeders, knowledge and expertise to raise their new pup successfully.

Most any LGD with good aptitude can be a reliable guardian, if the shepherd takes the time to start the puppy with good livestock manners.