When I started out with Akbash Dogs I was under the impression that you put the puppies in with sheep and as you noticed inappropriate behaviors you tried to catch the puppy in the act and make corrections. Well this sounded good in theory, but with this approach in training I was able to lets say catch the pup in the act one out of 3 times. The rest of the time the puppy got away with the behavior, which reinforced the behavior and it was merely luck I think that most dogs eventually out grew the playful stuff and became good dogs by maturity at age 2 or 3.

I now recommend people raise their puppies under strict supervision right from 8 weeks old on. 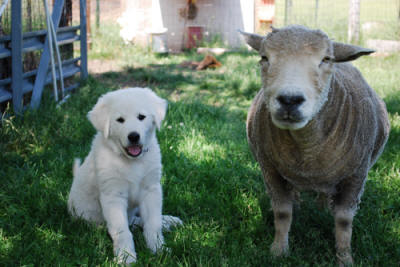 I found it made so much more sense to start a puppy with good habits right from the start then to let bad habits develop and then to spend years trying to break them. When the puppies learn proper behavior and good manners right from the start I find they become livestock safe sooner and I can usually expect my puppies to be safe with mature ewes by 6 months to a year instead of 2-3 years.

This is my routine today:

First of all it is very important to start puppies in a pen or pasture where they cannot get out through, under or over a fence. If the puppy doesn’t learn it can escape in the first year chances it will not know it can and it will stay in its pasture. If however you let the pup learn it can escape, that dog will likely be an escape artist for the rest of its life unless it is behind extraordinarily well reinforced fencing.To start preparing my puppies for their future homes I handle the pups every day. Research shows that stimulation makes the dog a better learner and it also helps them deal better with stress through out their life.

I put collars on the pups at 3 weeks of age. With different color collars on each pup, I can easily tell puppies apart to observe and note individual behaviors.

As soon as they start tumbling out of the whelping box to greet people, I begin obedience training. I call "puppy come "and then push them into a sitting position with a "sit" when they do come. I am automatically teaching them to come and I am also teaching them to sit in greeting so they will be less likely to jump on people. I also strongly believe in socialization, so from about 3 weeks on I have friends and neighbors come over every weekend to pet puppies. If the dam was well vaccinated the puppy petters will not bring any diseases into the environment and the socialization far out weighs the risk of disease to healthy pups.

When pups are about 5 weeks old and pretty steady on their feet, I will put 2 calm & gentle older ewes in with the group of puppies. I try out a number of sheep until I find a couple that are pretty tolerant of the puppies because at this point I am interested in starting the bonding process not much more. The puppies are still not very coordinated so I am not worried about play chasing or even mouthing at this point.

By 6-7 weeks the puppies may start some half interested play chasing or mouthing and I will start making corrections by either grabbing the puppy by the scruff and giving it fast jerk with a firm Leave it, or a swat with a horse riding crop on the shoulder and a deep voiced startle correction by making a harsh buzzer sounding "Ehh!" Of course follow that by a "good dog" when it backs off. ("Ehh" and "Good dog" are your most used commands until you have shaped their behavior)

Remember to praise good behaviors , pretty much every thing the pup explores for a while requires either an "ehh" or a "good dog" from you, By doing this the dog learns to easily understand what is expected of it.

Depending on the puppy and how much play interaction I see I usually will leave a puppy in with sheep full time until around 9-10 weeks of age. By this time they are getting more coordinated and then the pups go in to a pretty big yard (1/4 to 1 acre area) that shares a fence line with a flock of sheep so that they can still visit through the fence. They are allowed in with sheep only under supervision when I can make some good firm corrections for any play behavior directed to the livestock. If I can do this at least once daily I feel I am doing really well. I am even happy if I do it 3-4 times a week as long as they are next to sheep for some bonding and socializing the rest of the time, and they are in a large enough area to exercise. By doing this they learn right from the start they can not under ANY circumstance play chase or mouth. If I am consistent, & I can catch them in the act a few times and make timely corrections, then I have a puppy by 4-5 months with good livestock manners. Once I’m confidently that I have made enough "Good dog" praises and " Ehh" corrections that I feel they understand the rules ,then they can start getting more time out with the stock with less supervision.

The trick is to supervise them well. You have to catch them "in the act" to make a correction that they understand. Even 5 seconds after the act, the pup won’t make the association of the correction with the bad deed.Most people have to learn to recognize the puppies subtle behaviors so they can anticipate the pups intentions and be ready to correct the pup a split second before the pup actually does something .

Corrections should be of the startle variety, swift, short and firm. Praise for submission (submission being any or all of the following: a roll over, submissive peeing, an averted eye or simply the ceasing of the inappropriate behavior.

You can make a verbal startle correction with a sharp & deep voiced "ehh" (better than a no!). Another method of correction can be made if you take an empty soda can ,put a couple of pebbles in it an throw or shake it to startle the pup. You can also use a riding crop with a bat end to extend your reach and slap the pup on the rear or shoulder with a "NO"or "Ehh", or if the pup is right by you grab the pup by scruff, give it 1 shake with a booming "ehh" or "no" and immediately let go !

The nice thing about starting them as young pups is that they are usually right under foot, and if trying to grab a ewes ear, you only have to move a few steps to grab them or swat them with the riding crop on the shoulder and make a Verbal correction.As they get older and are out in a field play chasing there is no way other than an electronic collar to get in a timely correction.

Why an electronic collar? Well, Until the dog realizes it should not mouth or chase a verbal correction at a distance may distract the pup but it doesn’t really convince them what they did was wrong. By the time you run out to correct the dog, it sees you and stops the behavior. The delayed correction is no longer timely nor is it understood to be in reference to the behavior. The collar can deliver a correction within 3 seconds of the deed, which the dog will understand an associate with the deed.

At adolescence around 7-10 months of age I again start to really monitor the pups behavior. This is a time of "testing" for that teenage pup. If I notice any wool pulls or see chasing, I confine the dog again and allow it out with livestock only under supervision for a month to 6 weeks, and until you have had a chance to make a few good corrections for inappropriate play before turning it out again.

Under no circumstance do I allow any pup under 1 year and sometimes to 2 years, to be left unsupervised with young bouncy livestock. It is asking too much for that puppy to not join in when young livestock go racing around the pasture in play.It is a super time to put that puppy in with young stock under Supervision however. The chance of being able to make a correction for misbehavior is higher if there are tempting circumstances as there are when the baby animals are bouncing around in play!

So to conclude, Stimulate, Socialize, Bond, Train & Supervise! If You will make the effort to supervise that new puppy right from the start and for the first 3-6 months, and you are able to make well timed corrections for play chasing or mouthing every time they try something, you will be rewarded with a terrific livestock safe guardian dog at a relatively young age!

As an aside: to making corrections: It seems that lots of times people swat at the dog and miss or swat the dog gently and the dog begins to think of the hand flapping as a game and starts mouthing your hands. If this starts to happen know that your corrections are ineffective and the dog thinks your are playing some kind of mouth and hand game with it. So fair firm, consistent & deliberate must be your corrections.

Keep in mind an Akbash Dog will not respect you if you under correct it but if you over correct and by that I mean the correction was either too harsh for the deed or you kept correcting past that second the dog submitted (loose your temper), the dog may never forgive you. So its important to be a very good canine behaviorist and have a good feel for the type of correction that your particular puppy will need. Most all corrections take less then 3 seconds to deliver.And by all means call me if you have any questions. Even if you aren’t sure you have a problem its better to ask. I can help trouble shoot an issue before it’s a big issue.